Along the Wind Spear 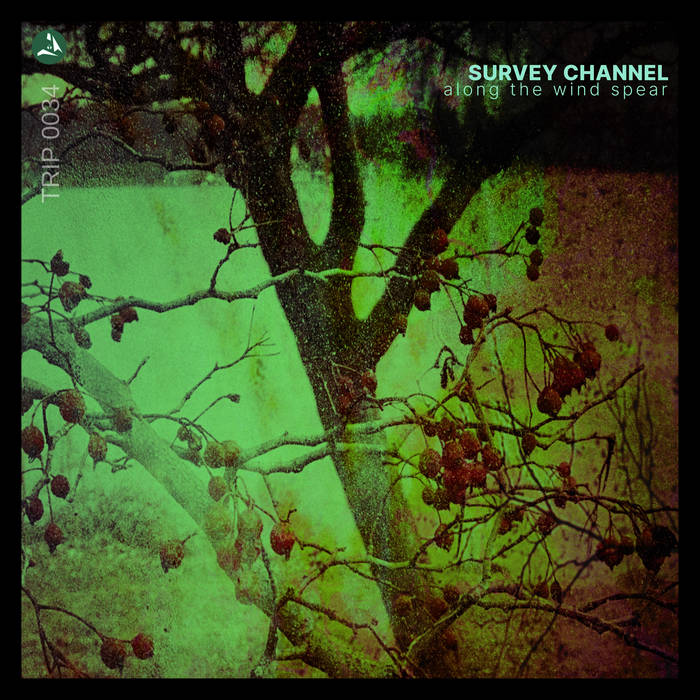 Armageddon_Speaking did you walk along the ridge and find your self in the meadows of dream walking? where are we now? here? there? or where in this place we have found ourselves. imagine that place could be us. Favorite track: Sleep Verses.

Cpektir Survey Channel never disappoints. When it comes to quality and attention to detail, he knows what he is doing and Along the Wind Spear may be one of the best records I've heard in 2020. Favorite track: Codes Reliable.

We're pleased to bring you some amazing new Lo-Fi downtmpo electronica from New York native Matt Donatelli aka SURVEY CHANNEL. "Along the Wind Spear" is thoughtful, masterful, and engaging. We're so lucky to be a part of this and hope you enjoy it as much as we do.

************************
Along the Wind Spear started out as an EP, based on vignettes that I had been working on after some new gear acquisitions. My goal starting out was to create an otherworldly, intriguing electronica album using sampling, cassette multi-tracking, and obviously, synthesis. There needed to be a melodic thread, a lot of groove, distortion, and overall age to the sound. As the work progressed, I was tapping into glimpses of memory; of my journey as an artist observing the world. The goal of my music is to present a slice of life out of time; something that can be interpreted individually. I started to examine the things that drive us, that corrupt us, and how we compete against each other so eagerly. Along the Wind Spear works to surface the material corruption, the dissonance, the solitude we feel as we work and grind, day in and day out. It is an album for escape and reflection; an album that evaluates the surface cracks of reality. It's vast and cosmic at times; at other times it is subdued and personal. It is fulfilling to put together over an hour's worth of music and not lose sight of the concept. I hope everyone enjoys the listening experience as much as I enjoyed crafting these tunes.

Along the Wind Spear, the Triplicate Records debut by the elusive Survey Channel is an absolutely massive record. Ambitions were clearly lofty during its conception, and deservedly so; a wide variety of styles within the vein of dark electronica are present here as you'd hope given its 65 minute running time, and more often than not, they serve to delight and intrigue the listener, rewarding attention closely paid. You like records about the cosmos right? My instincts tell me that's what he was going for.

A series of warped disorienting synth movements prise open the treasure trove on Fenwick, giving in to less tentative percussion on the following Denebula. You can kind of tell what kind of ride you're in for from the opening quarter of the record. You're looking at insect electronics soaked in echo and reverberation, interspersed with joyous key rolls, conveying wonder; forboding, and a sense of cautious optimism, further emphasised in the crushed organic beats. Sleep Verses' sound would be the crux of this emotional collage, perfectly collating the overall feeling of the record into a (relatively) compact instrumental pop song that will surely end up on your playlist.

The similarly excellent following track 'Tour & Shadow Days' maintains the preceding number's momentum-centred approach, this time careening through an evolving Boards of Canada-esque (I shan't mention them again we'll be here forever) wash of oddly syncopated synths and distorted vocals plucked straight from the ether of some defunct tin pot radio call in show, or maybe a numbers station.

The lush chord washes elevate the records already weirdly cheery mood just in time for it to be swept away and almost mocked by the sparse, tenseness of 'Codes Reliable', a gloomier offering that'd stop the record dead were it not for the raw visceral funk stomp of the excellent drumwork, fraught with static, seemingly ready to start a fight. The punchy aggression of the percussion duels with the reflective mourning chord programming, and the sound of mechanistic frustration, intentional or not is laid bare for all to hear, an anthem for the collective isolation of modern times.

All of sudden this is swept away, and a lighter ditty by the name of 'Daffodil Dream' releases some much needed serotonin into the proceedings. The beat here is lighter and breezier, and the pleasant keyboard sounds threaten to give up on gravity and float right away on a bed of easily digestible nostalgia. The following 'Gold Garden' seems like a natural follow-up given the title and tone; structure has clearly been carefully thought out here. While the percussion indeed takes on a more fragmented, dare I say menacing quality, the synths are still relatively easy-going, all gelled nicely together in some Golden aural lozenge.

The enigmatic warped-to-absolute-hell banditry of 'Sciron' signals a further move toward the pleasurably absurd, with its whooshes of metallic wizardry and spellbinding synth patterns soaked in noise, mod wheel shoved all the way up, maybe held there with tape or some make-shift weight, closing of the first half of what's already been a boundary-pushing record, signalling what's to come later. And you're not kept waiting you'll be glad to hear. Abruptly the second half phases in with the woozy haze of Tungsten Pillow's ambient exploration, saved a minute in with some sweet spot-hitting percussion work, complemented nicely with a longing keyboard refrain. Don't worry if you start hearing voices again at this point, it's ok I hear them too. There is definite single material here, no-less so for being placed so deep into the record, indeed the more conventional structure surely provides anchorage.

Super Sun Dissolve sounds like... A super sun, maybe a red giant... dissolving... slowly. Outer layers burning away, no supernova, no black hole, a leftover lukewarm core, one of the many coloured dwarf star variants, emanating a dim light, searching for existential justification. The tail end is comet-like. Thought you oughtta know that. Then again it's called Super Sun Dissolve so...

We're staying in space for the sublime yet subdued gradual galactic spiral of 'Bare Moon Polaris'. Slow motion initially dominates the final third of the record, and indeed this odd genre seems well suited to the lower tempos on offer here, punctuated with elegent energetic forays, such as the lavish 'Via Skyway', wherein images are conjured of some science fiction transport thoroughfare through the mesophere, with great astral cars slicing through cumulus clouds through an ever fading utopian future-scope.

Sheen is once again swapped for haze on Outfit's opening vignette, a pretty melody that's over as soon as it begins The bulkier portion of the track starts in earnest around the minute mark, but it's formless. The sound of decompression, Survey Channel allowing the album to pause for breath and explore it's autonomous self, before some lo-fi demonic force creeps in and puts percussion back on the menu. Well placed chords and synth-stabs under a rumble of unease makes for an almost unsettling atmospheric adjustment. A dying air-craft kept aloft mainly thanks to the pilots keen sense of song-craft.

There's no track preceding the fourteenth entitled 'Platescrape' yet we're treated to a reprise of it nonetheless. In fact this appears to be a re-structuring of sorts from the opener of last years excellent 'Mulberry' LP which is well worth checking out. Y'know, after you've nabbed the one WE'RE distributing. A-hem... But it's a good little tune and well placed between two mammoth tracks, the aforementioned 'Oufit', and the gargantuan closer 'Dirt Bike'. Here we have almost thirteen (!) blissful minutes of Survey Channel's quality programming. Through an amorphous initial phase awash in bubbly synthesized hopes and dreams comes a bit-crushed percussion sequence that'll have you tapping various appendages if you're not careful. Cracked up snare smacks and hi-hat rushes seeming constructed entirely from TV static and that feeling you get when your foot falls asleep. The slow burning wonder of Bare Moon Polaris & Super Sun Dissolve is recalled here as reality seems deconstructed before your very eyes (or ears), with synth swirls that feel like a membrane of absorbancy soaking up liquid sunlight. The rubbery ever-turning wheel of melody anchored in the mechanistic spokes of percussion chewing up the dirt of the heavens, or something like that. I could fall asleep comfortably to this if I weren't so engaged.

You have no good reason not to pick this record up. It's really long and really good. Do you have any idea how rare that is for underground electronica? Don't delay, grab your copy of Along the Wind Spear ASAP.

Bandcamp Daily  your guide to the world of Bandcamp